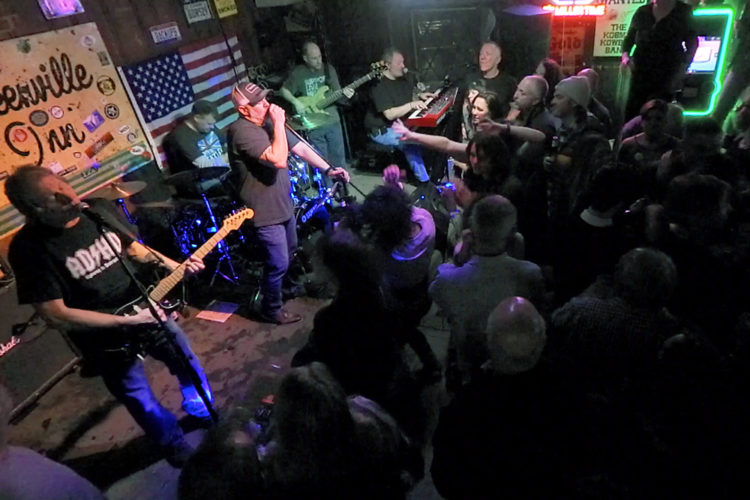 AFTER 20 YEARS OF ROCKING CLEVELAND, SKINNY MOO SHOWS NO SIGNS OF SLOWING DOWN.

Skinny Moo began as a blues band in 1999, evolving quickly into “an original cover band”: unhindered by musical eras or styles, they are a band that take every song they perform and make it their own. After two decades, the group remains one of the premier musical entertainment experiences in Cleveland, performing up to 50 times each year.

Accolades for Skinny Moo include being recognized by Cleveland Magazine as one of the top cover bands in the region in a Best of Cleveland issue, culminating in a performance at the Best of Cleveland party at the Rock Hall. The Cleveland Cavaliers brought Skinny Moo into Rocket Mortgage Fieldhouse (formerly Quicken Loans Arena) multiple times to play on the floor for Cavs watch parties and games. Fox 8 News has invited Skinny Moo to perform live on the air on numerous occasions. And these are just a few of the venues Skinny Moo is apt to visit during their busy schedule.

Audiences of all ages (and fans of all musical styles) respond to the chemistry of this group of seasoned musicians, all close friends, and all of whom have played in a “who’s who” of local and regional groups. People can’t get enough of the energetic delivery of songs that span the entire spectrum of musical styles and eras: from ’60s soul and ’70s funk through ’80s pop and ’90s rock and all the way to current tunes.

Adding to the band’s appeal is their ability to improvise, creating impromptu medleys or inserting bits of requested songs seamlessly into whichever song they are performing – often with unexpected and amusing results. The goal of every Skinny Moo performance is to make music fun for everyone, including the members of the band:

Jay Goodman (Lead Vocals)
Jay started his musical career in an award-winning high school performing group which would later inspire the hit show “Glee” (allegedly). He was selected to perform in the prestigious All-Ohio State Fair Youth Choir. His first gig was fronting the original project Just Bob. The band performed throughout the Cleveland area for 4 years before disbanding. Jay has also had the privilege of performing the National Anthem at numerous professional athletic contests highlighted by a September 14, 2001 performance, just 3 days after the attacks on the US.

J Russell (Drums)
For the last 20+ years, J Russell has had the opportunity to record and perform at various CLE venues both large and small, with a talented bunch of musicians including Otis & The Shoreway Saints (2004-present), Steamshovel (1999-2003, 2019-present), Dashboard Lights, The Millers, Random Tree, and fill-in gigs with Broken Record, and The Suburban Culture.

J gives huge thanks to the guys of Skinny Moo (Jay, Jeff, Mike, and Scotty) for trusting him with “version 2.0” of the band, and is excited to keep things rockin’!

J also send a special shout out to Charley Newcomer for setting such a high standard, and helping to make the “Moo Machine” possible for 2 decades!

Mike Crow (Bass, Vocals)
Mike has been playing bass for over 20 years and has performed with many acts including Rock and Roll Express, Anne E. Dechant, The Simpletons, Frank Camp, Zach, Akron-based band Sutra, Ray Fogg, and the Brian & Joe Band.

Jeff Endemann (Guitar, Vocals)
Jeff has been performing for over 30 years in various original and cover projects such as Big Machine from the late 80’s “Hair Metal” days, Hammered and S.O.S. through the ‘90’s, Spank the Band and most recently the original metal band SEVEN. He performs as the “Angus” in the Cleveland-based AC/DC tribute act High Voltage, and still “rents” himself out to other AC/DC acts in need of his services from time to time, if the $$ is right, of course.

Jeff has also recorded with the Goth artists known as Nox Arcana, and recorded his first solo CD of his musical collaboration with his wife called “So Far”.

Scott Martin (Keyboards, Vocals)
Scott has performed and/or recorded with regional groups including the Foonspeeders, Thomas Reed Smith, the Tony Lang Band, Brent Kirby and One Way Home, David Magdalene, Robin Stone, Alexis Antes, Will Bowen and others. He has lent his voice and keyboard skills to the Cleveland Cavaliers QTV for multiple in-game videos.

Find out more at skinnymoo.com